An update on my Dvorak learning experience, one year later. I switched one year ago, over Thanksgiving break.

When I started, my goal was to get to 40 WPM to feel comfortable getting my daily work done. With that goal accomplished, I ran drills continually with the MasterKey software, and watched my milestones go by: 50, 60, 70.

Today my average speed in drills—with accuracy—is 75 WPM, very close to what I was with QWERTY before the switch. What I lost in time and energy learning the new layout I’ve gained back in bunches with touch-typing skills and typing confidence. I’ve learned to use the top number row (and its related symbols) much better now, and rarely look down.

I don’t have efficiency stats to compare before and after, but my confidence and speed in typing make me feel great about this decision.

Verdict: typing is fun. Just like any tool I use, I’m aiming to master it—and I’ve found it’s more fun when done with confidence and expertise. Every day is stronger, faster, better.

Quick update on my progress typing with the Dvorak layout (see original post first if you missed it). I am now averaging 65 WPM in my drills, though I am a bit slower in real usage.

Last week I blanked out my keyboard with stickers to force touch typing using Blank Keyboard Stickers in white from 4keyboard.com on my Mac keyboard.

I first considered getting the droolicious Model S Ultimate Silent Keyboard from Das Keyboard, but since it’s a bit pricy I opted instead to use the stickers as a low-cost first step.

Today I changed the keyboard settings on my Mac to use “Dvorak” instead of “Dvorak – Qwerty ⌘” to force myself to relearn my keyboard shortcuts.

So far, so great.

To work smarter and faster at my craft, I took the plunge and switched to the Dvorak Simplified Keyboard.

At our Automattic company meetup in September Matt handed out paper copies of The Dvorak Zine, a fun, well-written treatise on why Dvorak is better than the traditional QWERTY keyboard layout. I read it on the plane ride home, played with Dvorak settings on my laptop a bit, and vowed to make the switch during my next extended time off work.

Here is the timeline from my switch.

For fun, here are some stats as of December 9th, 2010 based on my Master Key drill results. 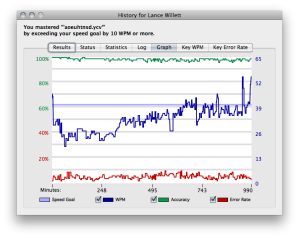 For more on Dvorak, see Matt’s 2003 classic: On the Dvorak Keyboard Layout.

Update December 14, 2010: My goal with learning Dvorak is to get faster and more efficient at typing than I was with QWERTY—with which I type 75 WPM with accuracy. The 40 WPM mentioned in the timeline was during drills used to learn Dvorak; that speed is not the end goal.

Update December 28, 2010: This week I passed the Master Key drills again with the speed goal set at 50 WPM. My average speed is approaching 60 WPM.